A barber has been giving free haircuts in Cardiff Central Station to encourage people to open up about their mental health. Tom Chapman founded the charity after his friend took their own life. Mr Chapman has now made it his life’s work to address the stigma around suicide and mental health. He believes that barbers and hairdressers have a unique position in their clients’ lives.

The Lions Barber Collective was giving free haircuts at Wales’ busiest train station in an event sponsored by Transport for Wales, who say that they are actively encouraging people to open up about their mental health, especially after lockdown. Read more: The owner of Cardiff’s much-loved Creperie de Claudie is shutting it and moving to France.

“After his death, I had a conversation with a guy in my chair who was contemplating taking his own life. We spoke about his situation and now, because of that conversation he is still alive and now has a family,” said Mr Chapman.

He explained that people in the hair and beauty industry are in a unique position within society to speak about mental health as they develop a trust with their clients. The charity trains barbers to spot suffering related to mental health and help customers find the help they need.

Having worked with psychiatrists and mental health professionals, The Lions Barber collective developed the BarberTalk course to help prepare barbers and hairdressers with the skills they need. Mr Chapman said: “The salon or barbers is a non-judgmental environment, and as an industry we can bridge the gap between the communities we serve and help them.”

The initiative has been a great success in Cardiff Central, with people waiting for the barbers to set up before 9am. Jackie Slater, 57 and her son Conner Stevens, 22, came especially to have a haircut by the barber. Ms Slater said: “Mental health should be spoken about more, there should be more help. At the moment it is rubbish.”

Conner Stevens was diagnosed aged three with severe early onset ADHD and has tried to take his own life three times. He lives at home with his mother, both of whom work for Transport for Wales.

Ms Slater said: “The only reason I managed to get him here was because of what this is for. He wants people to know about the subject. These two are doing a brilliant job, and they shouldn’t have to pick up the slack. The government should be doing more.”

Ms Slater explained that it is not only hard for those who have mental health issues, but for their families too. “We seem to get forgotten. It’s very hard,” she said. “The doctors are overworked; the national health service is busting. Who do you go to?”

Kieron Elward, 19, got his hair cut in Cardiff Central. He said: “I heard about this on WalesOnline and I saw that it was promoting men’s mental health. I came down because I’ve not been having a good time myself as of late and I wanted to take the opportunity.

“Especially in modern day society, you don’t get many opportunities for men to speak up about their mental health. Things like this are important just to get that load off men’s chests.”

Mr Chapman explained that society has gotten better at promoting speaking about mental health, but often the response to people talking about their mental health can be negative. He said: “If someone’s opening to you, especially as a bloke, you may be the only person they’ve told. If you respond badly, they might not open up to anyone again. That may have been the only chance.”

He said that the way to spot when someone is struggling is to notice when their behaviour changes. He said: “If they are suddenly isolating or going out all the time and drinking loads, don’t be afraid to ask questions. Listen to what they have to say and let them know you are here for them, then help them find the professional help they need.”

Matthew Davies, 43, found out about the initiative from a colleague at Transport for Wales, he said: “Especially coming out of lockdown, mental health rates are through the roof. There is a massive taboo about mental health, some people aren’t comfortable speaking to family and friends.” Mr Davies said. “These two are absolute gems, chatting to people and helping people.”

Samaritans operates a free 24-hour phone service every day of the year. Just call 116 123 to speak to someone if you need help. If you prefer to write down how you’re feeling or if you’re worried about being overheard on the phone, you can email Samaritans: [email protected]

Save on men's suits ahead of wedding season 2022

Wed Apr 13 , 2022
— Recommendations are independently chosen by Reviewed’s editors. Purchases you make through our links may earn us a commission. With the days of zoom weddings more or less behind us, this spring could see more weddings than ever before. If your schedule is packed with engagement parties, rehearsal dinners, receptions and […] 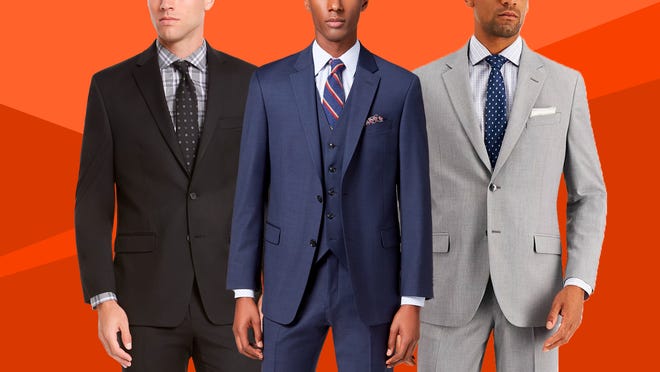