Fiber artist and variety Twitch streamer Destinee took to Twitter after finding that a hair salon they were looking at costs (for a basic haircut) $40 for men, $50 for women, and … $70 for non-binary people. Yes, almost double. To be clear, this is just for a haircut. This doesn’t account for coloring or a number of specific things like braids, etc. that will understandably cost more.

While there is at least one other shop that also charges more as a range between the price for a women’s and men’s cut, I’m unsure if this is a larger trend to charge enbies more than men and women for a simple haircut. However, the fact that women’s hair cuts generally cost more is unfortunately pretty on par. I’m iffy as to whether it qualifies as a Pink Tax considering it’s a service, and there’s more at play than simply upping the price on goods/products.

How people are navigating this

Regardless of whether the cost of styling qualifies as a pink tax, it’s wrong. Some states like New York have tried to tackle this issue, but when it comes to barbers and stylists, it’s going to vary wildly. There may be a price up on the wall, but sometimes they’ll charge more or less based on a number of factors. According to a 2018 U.K. Vogue article, they reported that many are forgoing salons for barbers when it comes to very short cuts because of the price differences.

Some people, including Destinee, say it should depend on the time it takes to handle the hair, but I’m going to push back on that because that thinking is part of the reason hair textures associated with Black women and femmes (type three and four) costs so much more. If we’re not outright told “we don’t have anyone to do your hair” at general salons and shops, then we’re charged more because it takes them more time to “figure it out.” Charging standards by length is a much fairer place to start for standard cuts and trims.

Just in case it needs to be said, though some non-binary people may gravitate towards a shorter hair type for an androgynous look, non-binary haircuts don’t look a certain way. A long, silky hair down your back is just as much non-binary as a Rachel haircut or loose fro. Just like commercial items and services, this is part of a larger conversation to be had about the other unnecessarily gendered things as the binary default.

—The Mary Sue has a strict comment policy that forbids, but is not limited to, personal insults toward anyone, hate speech, and trolling.—

Have a tip we should know? [email protected]

Fri Jul 29 , 2022
If you thought jeans is an eternal favourite of men today, think again. You will be surprised to see just how common is a formal pair of pants when it comes to men’s wear section. There are many reasons why men opt for this attire – first, they look smart; […] 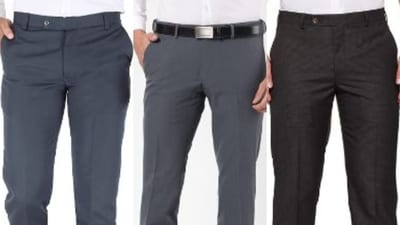