The best hair growth pills and supplements are made with well-studied ingredients that combat hair loss.

Hair loss is a fact of life for many of us. Some 70 percent of people assigned male at birth and half of those assigned female at birth are going to experience some hair loss by the time they reach 70, says Jeffrey Rapaport, MD, founder of Rapaport Hair Institute in Englewood Cliffs, New Jersey.

Aging is the most common cause of hair thinning, aka androgenic alopecia, per the National Library of Medicine. But there are others: an overactive immune system (called alopecia areata), polycystic ovary syndrome (PCOS), physical stress such as childbirth, psychological stress, menopause, COVID-19 and certain vitamin and mineral deficiencies.

A Note on Language

In this article, we mention several studies on hair loss. Participants in these studies were classified by the researchers in the binary paradigm of “male” and “female” or “men” and “women.” The studies did not include participants who were nonbinary, transgender, gender-nonconforming, genderqueer, agender or genderless. As a result, we use similar binary terms so as to accurately represent the original research (see the full explanation on why we use the language we use). Similarly, few if any research studies reported specific findings on hair loss in Black people or other specific racial and ethnic groups.

Prescription medications for alopecia basically work by blocking the male hormone DHT [dihydrotestosterone] at the receptor sites so that [it doesn’t] damage and shrink the hair follicle and hair,” explains Howard Sobel, MD, a dermatological surgeon at Lenox Hill Hospital in New York City.

Minoxidil may be the best-known remedy in this category. As a topical treatment for hair loss, you’ll find it in products like Rogaine.

“Rogaine can work,” says Jerome Potozkin, MD, a board-certified dermatologist in Danville, California. “It’ll slow down the hair loss you have and some lucky ones will see significant new hair growth.”

But minoxidil is also sold as an oral medication. One February 2022 meta-analysis in ​JAMA Dermatology​ concluded that 5 milligrams of oral minoxidil a day was more effective at promoting new hair growth in men than smaller and larger doses.

The Food and Drug Administration originally approved minoxidil to treat blood pressure issues. It’s not approved for alopecia but is widely prescribed off label.

The biggest side effect is facial hair growth, says Dr. Potozkin, although minoxidil has also been linked with an abnormal heartbeat and weight gain, per the Mayo Clinic. And keep in mind that it may take as long as a year to see any benefit.

Like minoxidil, this is another once-a-day prescription pill (brand name Propecia). “A percentage of people [who use it] will grow significantly new, thicker hair,” says Dr. Potozkin.

In the ​JAMA Dermatology​ 2022 meta-analysis, 5 milligrams of finasteride worked even better for hair loss than an equivalent dose of minoxidil, though it does come with potential side effects, such as trouble getting an erection and depression.

While the FDA approved finasteride for men in 1997 (it was first approved in 1992 for an enlarged prostate), it is not approved for women due to a risk for birth defects, says Dr. Potozkin. Some doctors do prescribe it off-label in postmenopausal women who are experiencing hair loss.

Like minoxidil, finasteride requires a commitment of at least a year.

Side effects associated with oral finasteride include the following, per the Mayo Clinic:

Spironolactone (Aldactone) was first approved to treat hypertension and heart failure but, like minoxidil, is often prescribed off label for female pattern hair loss (the kind associated with age). In fact, it’s the most widely used alopecia medication for women.

According to a July 2020 research letter in the ​Journal of the American Academy of Dermatology​, female participants in one study who used spironolactone for six months did see an improvement. The longer they used it, the more effective it was. Women who had more hair to begin with also saw better results.

In studies, says Shoshana Marmon, MD, PhD, assistant professor of dermatology at New York Medical College and Coney Island Hospital in Brooklyn, New York, “patients had the best response to this medication after a year of regular use.”

The list of potential side effects from spironolactone is long, per the National Library of Medicine, including:

This pill is used to treat benign prostatic hyperplasia (BPH) or an enlarged prostate in men but is also approved for androgenic hair loss in men. A comparison of dutasteride and finasteride in three studies concluded that dutasteride was more effective, per a February 2019 systematic review and meta-analysis in ​Clinical Interventions in Aging​.

Like finasteride, though, dutasteride should not be used in women of childbearing age. It also has similar side effects to its sister medication, namely: lower sex drive, difficulty ejaculating and erectile dysfunction, per the Mayo Clinic.

Vitamins and Supplements for Hair Loss

This hair-growth supplement contains vitamins A and C as well as the B vitamin biotin and saw palmetto.

One small May 2018 trial in the ​Journal of Drugs in Dermatology​ sponsored by the company that makes Nutrafol reported an increase in hair growth among 26 adult women taking Nutrafol Women’s Capsules for six months.

Biotin deficiencies, which can result in hair loss, are treated with supplements. There’s less evidence that biotin is effective in hair regrowth in healthy people. One small March 2015 study in ​Dermatology Research and Practice​ found that a supplement containing biotin, among other ingredients, slowed hair loss and promoted new growth in women who took it regularly over three months.

While vitamin A supplements may help combat hair loss in people who don’t have enough of the vitamin, too much may actually make matters worse. “Vitamin A can help the absorption of the active ingredients but can also be irritating to the hair follicle,” says Dr. Sobel.

As for saw palmetto, which inhibits androgens, Dr. Marmon says, “A number of studies support the use of this supplement to stabilize hair loss and it is well tolerated without significant side effects.”

This supplements has a relatively good track record, says Dr. Rapaport: “It has marine collagen, and there are studies to show it works.”

According to a December 2018 article in the ​International Journal of Women’s Dermatology​, both the saw palmetto in Nutrafol and the marine protein compounds in Viviscal may work for alopecia when given alone, but there’s not much evidence to support that yet.

Viviscal also contains biotin, which deserves one note of caution: It can throw off blood tests, says Dr. Rapaport. “I’m not really advocating biotin unless someone is completely deficient, which means they have a very, very bad diet,” he adds.

There is evidence that zinc supplements can help hair regrowth in people with deficiencies. Our bodies don’t make zinc — we get it from zinc-rich foods such as fish and meat.

This is the most common nutritional deficiency worldwide, and it can cause hair loss. Iron supplements may help with hair loss due to actual deficiencies, but there’s no evidence to suggest they will help thinning hair in healthy people.

“Your dermatologist may want to check the levels of iron in your blood before recommending this supplement,” says Dr. Marmon.

There’s limited data to suggest that fish oil can help with hair regrowth. We do know that eating fish (like salmon), which contain high amounts of of omega-3 fatty acids, helps to ward off heart trouble.

There’s little information on hair growth products for Black women, even though almost half have reported hair loss, according to a 2016 survey from the American Academy of Dermatology.

The most common cause of hair loss in this population is central centrifugal cicatricial alopecia (CCCA) where inflammation can lead to permanent hair loss. Treatments include steroids and other anti-inflammatory medications as well as oral antibiotics and minoxidil.

Another cause is called traction alopecia, caused by prolonged and tight pulling on the hair, often from hair styles like braiding or cornrows. Traction alopecia can be remedied by changing hair styles to looser settings. In more severe cases, minoxidil may help, per the Skin of Color Society.

Jada Pinkett Smith has alopecia areata, an autoimmune disorder which is more common in Black adults than Asian or white people, per Yale Medicine. Treatments include topical formulations as well as steroids and other medications.

Keeps is an online company that will deliver finasteride pills to your door. It also offers topical treatments including minoxidil and prescription shampoo.

Customers who go to the site will have an online consultation with a health care provider in one of several specialties (including dermatology) before receiving a finasteride prescription.

For Hers sells a variety of hair-loss products geared toward women. This includes oral spironolactone as well as topical finasteride and minoxidil.

The process is much the same as with Keeps: an online consultation with a doctor will get you a prescription, and the pills are then delivered to your home.

Viviscal hair-loss supplements for men and women are widely available without a prescription online as well as at local retailers.

What to Know Before You Buy

Treatments will typically only work if you still have some hair, so the earlier you start, the better.

The four prescription medications for hair loss and hair growth — minoxidil, finasteride, spirolactone and dutaseride — are all well studied with clear directions for how much to take and when.

Over-the-counter vitamins and supplements, on the other hand, often are not. That means you may not know what the optimal dose is.

What’s more, because over-the-counter supplements aren’t regulated in the same way as drugs, you can’t always be sure that what you see on the label is what you are actually buying.

Before plunking down any money, see if your doctor can recommend a reputable brand.

Some alopecia products may also contain some of these ingredients:

According to Dr. Sobel, these are helpful for the health of your hair and hair follicles, but on their own are not responsible for hair growth.

Androgenic alopecia is an unsurprising (if unwelcome) result of aging and doesn’t necessarily require any medical intervention. Other causes of alopecia may not be so benign. It’s worth checking with a medical professional before embarking on any hair-growth regimen to rule out other causes.

They will also be able to tell you about other therapies, like light devices.

Thu Apr 14 , 2022
A glorious weekend at the Masters has come and gone. What can we do to pass the time while we wait another year for the return to Augusta National? We have eight glorious Masters-themed accessories to help you daydream about April 6, 2023. During the past week we’ve helped you […] 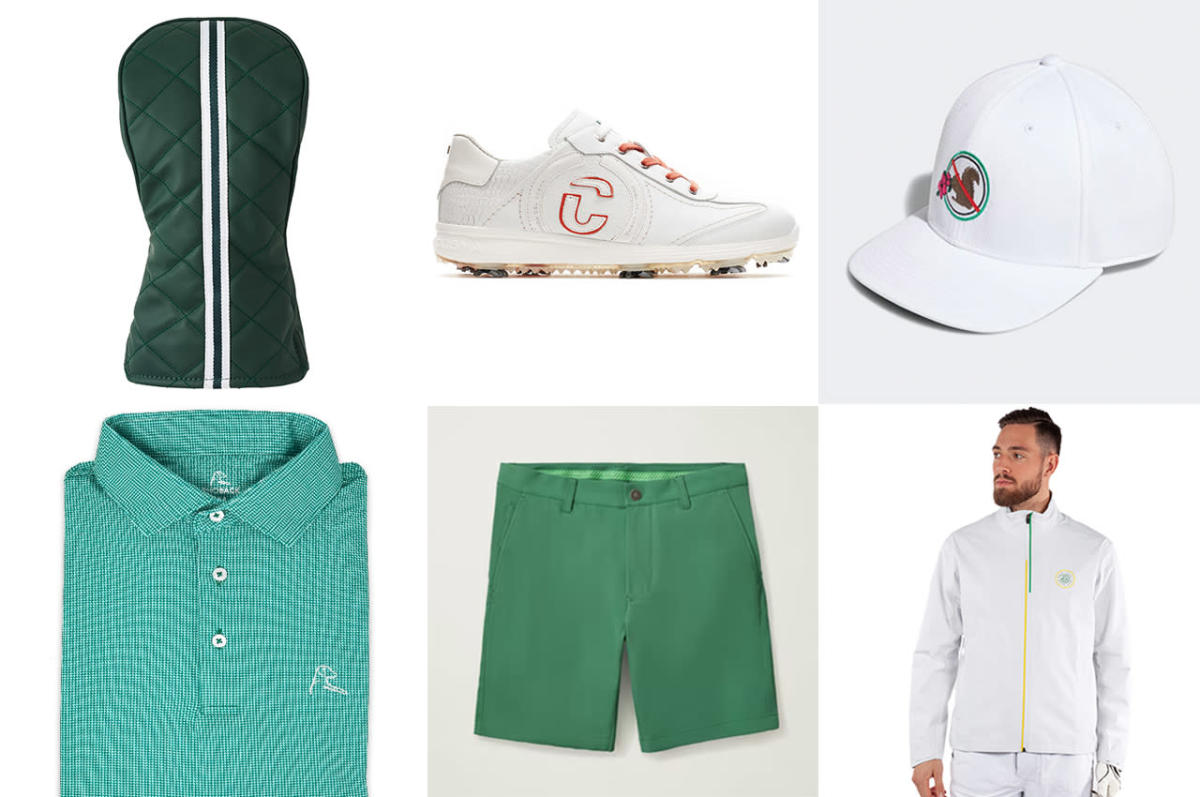