Remember those New Year’s resolutions you made when January seemed a lifetime away? If you just groaned, it’s probably time to invest in some stylish men’s workout clothes. Not only will a grip of fancy new gear help you stick to those ill-conceived resolutions well into 2023, it’ll help you get some galactic-level fits off in the process—even if you’re sweaty as hell, huffing and puffing like you blew the house down. Those scratchy old band tees and baggy basketball shorts won’t cut it when you’re facing off against your gym nemesis on the elliptical, and as much as we love Swooshes and Stripes around these parts, there’s a whole other world of sleek, performance-minded activewear brands out there for you to explore. Here are 16 cutting-edge athletic labels we love—each a top-notch purveyor of stylish men’s workout clothes—that’ll keep you feeling motivated and ready to move through the new year and beyond.

Longtime GQ Recommends readers know how we feel about Rhone. Their breathable, odor-fighting tees have held down the top spot on our list of best workout shirts for years now, and we’re such big fans of their thoughtfully-designed shorts that we made them the flagship product of one of our Boxes a few quarters ago.

Boston-based Tracksmith transplants Chariots of Fire-era aesthetics onto modern marathon-ready gear in a way that feels natural, stylish, and not the least bit kitschy.

After shaking up the performance eyewear game with their ultramodern Japanese frames, District Vision has turned their attention to apparel. Their latest innovation is a stretchy, lightweight mesh called Air-Wear, with thousands of tiny pores that open and close as you move to regulate your body heat and sweat.

Given all the hype and celebrity loyalists, you’d be forgiven for assuming that Outdoor Voices deals in loud, splashy, logo-heavy kits. In truth, they’re so beloved because they specialize in some of the subtlest, lowest-key, most technically sound workout gear around.

If handfeel is your number-one criteria, then Vuori is the move. Its buttery, sumptuous, stretchy sweats make all other pants feel like sandpaper by comparison.

Need to feel completely free in order to really hit your stride? Ten Thousand’s featherlight Session shorts and Distance tees are built to be as efficient as possible to stay out of your way and your mind.

With their streamlined silhouettes and advanced tech-y fabrics, Isaora’s precision-engineered clothes sometimes look like they were pilfered off the set of a Denis Villeneuve-directed space opera—in the best way possible.

The upscale, forward-thinking wing of Vancouver outdoor label Arc’teryx, Veilance focuses on bridging the gap between the streets and the trail: their parkas and blazers are sharp enough for your everyday life, but they’re built with enough under the hood to survive scaling a mountain. Its simpler stuff, though, is perfect for training at home while fantasizing about being out there.

Reigning Champ is Canadian through and through, focusing on high-quality materials (its French terry is exceptional) and high-functioning performance details. Everything is made and designed in its hometown of Vancouver, and its year-round staples will take you from couch to crunch with comfort and ease.

Bandit Running is only a couple of years old, but it’s already cultivated an ardent group of customers, who flock to the NYC-based brand in droves to snap up its sharp-enough-for-an-early-Zoom half-zips and cozy, subtly-branded sweats.

If your name is Tim Soar, you’re all but legally obligated to start selling gym clothes. So in 2015, that’s exactly what the London-based designer did, churning out slick, colorblocked running gear designed to help you sweat out the toxins after the club.

Most workout gear announces its presence from a mile away. NYC-based Jacques takes the opposite approach, leaning on a roster of crisp neutral tones to make activewear so pristine it’s almost a shame to dirty it in the squat rack. But dirty it you should—especially if you’ve got a closet stuffed with so many subdued designer grails it’d make Lydia Tár blush.

Ever wondered what it would feel like slanging weight at Gold’s in its sweat-soaked heyday? Y,IWO harnesses the endearingly cheesy energy of Pumping Iron-era Schwarzenegger—think retro graphics, bicep-hugging cuts, and bright, saturated colors—to imbue your gym selfies with a healthy jolt of ’70s-era sleaze. It’s about time you tried a crop top anyway.

All it took for Miler Running to take home a Fitness Award this year was equipping its top-notch shorts with a couple of damn pockets—they’re that good. To absolutely no one’s surprise, the rest of the brand’s murdered-out wares, made in New York out of fabrics sourced from the European capitals of the world, are equally stellar, too.

Yes, Janji’s peppy, tasteful workout gear looks great, but it’s the mission behind the garms that really distinguishes them from all the other synthetic gloop on the market. Everything the brand touches, from the materials it sources to the packaging that arrives at your door, puts the environment first, with a particular emphasis on supporting clean water initiatives around the world.

Wed Jan 4 , 2023
Trevor Brazile and Ariat collaborate on a tech-focused new boot collection. Ariat Trevor Brazile, record-holding 26-time Earth Winner cowboy, experienced an concept. His seven-yr partnership with Ariat authorized that plan to split him from his consolation zone although keeping accurate to the roots of western boots. Brazile and Ariat collaborated […] 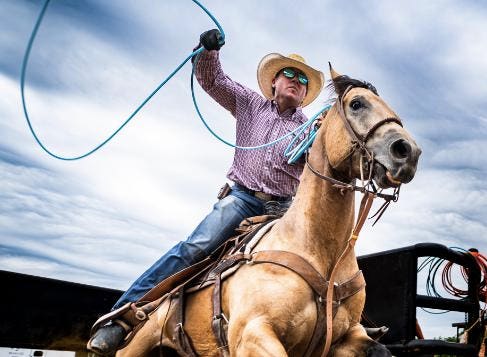