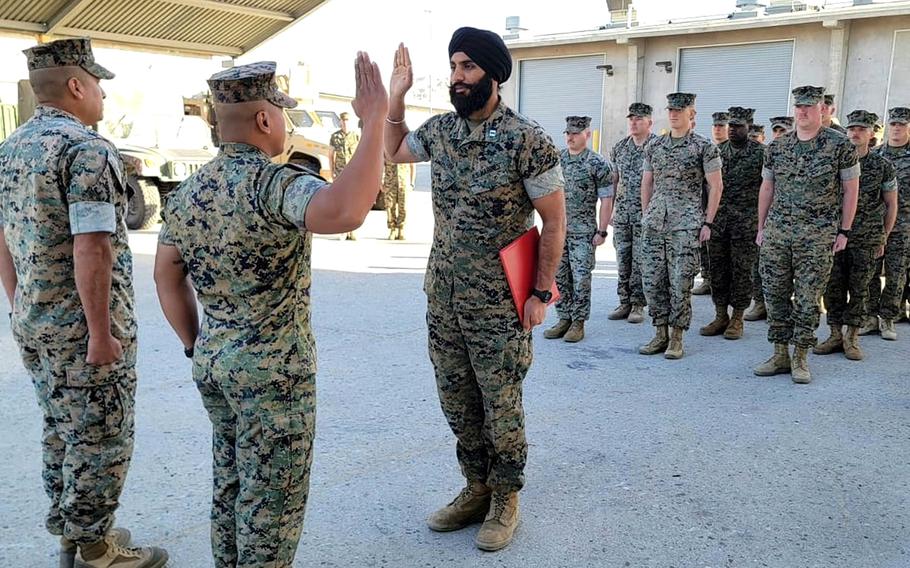 Capt. Sukhbir Singh Toor, an active duty artillery officer seen here at his pinning ceremony in March 2022, is suing the Marine Corps, saying policy that prohibits him and other Sikhs from wearing beards or keeping their hair long in combat zones and boot camp is discriminatory. (Sikh Coalition)

An active-duty Marine artillery officer and three prospective recruits, all of whom are Sikhs, are taking the U.S. military to court over rules prohibiting them from having a beard and long hair or wearing religious items.

In the lawsuit, Capt. Sukhbir Singh Toor and the three others contend the Marine Corps is unfairly and unevenly applying grooming standards — relaxed or eliminated in some cases for other religious, ethnic or racial groups — while serving in combat zones or attending boot camp.

The result violates the men’s religious, speech, due process and equal protection constitutional rights, the lawsuit states. It also forces them to abandon the tenets of their faith if they want to succeed in their military careers or serve their country, it states.

The lawsuit follows more than a year of efforts to engage with the Marine Corps, said Giselle Klapper, a senior staff attorney with the New York City-based Sikh Coalition, one of the groups representing the men. 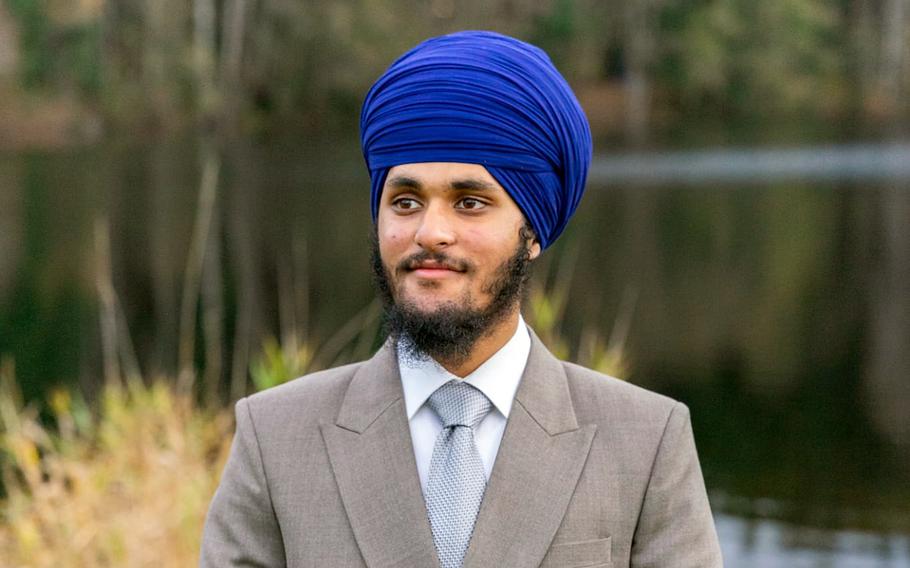 “Treating a Sikh’s beard, a core tenet of the faith, as merely optional is unacceptable,” Klapper said in a statement Tuesday. “It is time for the USMC to recognize what the U.S. Army, U.S. Air Force, and armed forces around the world already know: Articles of faith do not preclude Sikhs from capable military service.”

It asks that the men be allowed to keep their beards and long hair and be able to wear religious attire, such as a turban or ceremonial knife, at all posts without penalty or negative influence on their careers or the ability to join the Marines.

In court documents, the Marine Corps has maintained that the grooming standards, including shaven faces and short hair on men, are needed to establish discipline and order across the ranks to promote esprit de corps.

Aekash Singh, a prospective Marine Corps recruit, is one of four Sikhs who contend in court filings that the service is unfairly and unevenly applying grooming standards to them. (Sikh Coalition)

It also has stated beards could interfere with the effectiveness of a gas mask from chemical, biological, radiological or nuclear agents.

But in January, the service changed its shaving rules to allow some service members with a painful skin condition caused by shaving, mostly suffered by Black and Asian men, to forgo the requirement.

Rules against full arm tattoos and certain hairstyles for women, including braids, locks or twists, also recently were eased as the service worked to diversify its ranks and promote recruitment and retention, the lawsuit points out.

The Army and Air Force make accommodations for Sikh service members. The Navy has made similar changes for Jewish and Muslim sailors pending the outcome of a lawsuit. None of the other branches impose limitations for recruit training or combat zones, the lawsuit argues.

Toor, who serves with the 3rd Battalion, 11th Marines at Twentynine Palms, Calif., joined the Marines in 2017. He initially made the “difficult choice to cut his hair and shave his beard” when a recruiter told him the service would not grant a waiver, the lawsuit states. 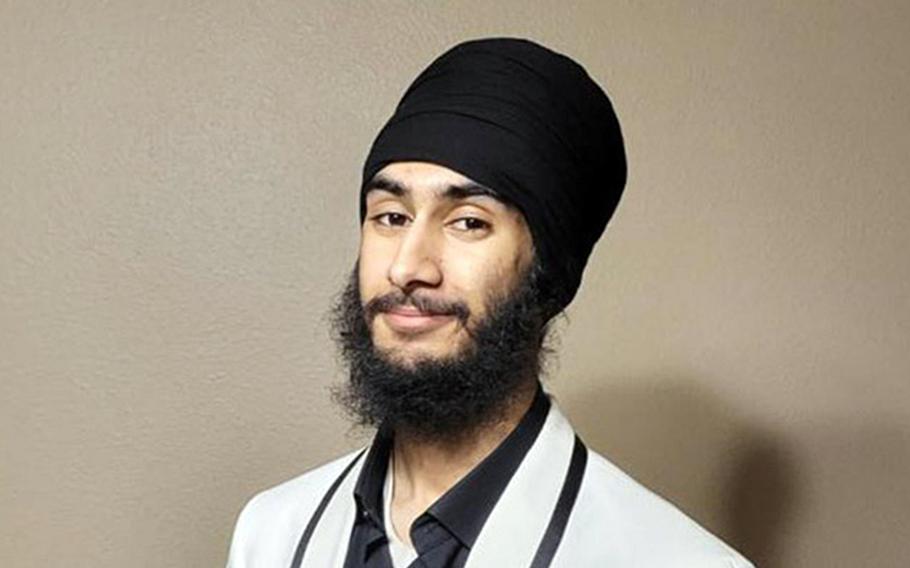 About a year ago, Toor asked for a religious accommodation. After a series of appeals, the Marine Corps said he didn’t have to cut his hair but could not have a beard or wear a turban if he was serving in a combat zone.

Some 39 countries, including Turkey, Israel and Algeria, have been identified as potentially hostile environments by the Marine Corps, the lawsuit states. The decision effectively sidelines his career, Toor maintains.

“I have proven my commitment to the Corps through my four years of service, and I’m ready to deploy just like any other service member,” Toor said in a statement Tuesday. “I can’t do that, however, as long as I’m left on the bench because of my religious beliefs.”

“We remain ready to meet the high mental and physical standards of the Marine Corps because we want to serve our country alongside the best,” the men said in a joint statement Tuesday. “We cannot, however, give up our right to our religious faith while doing so — not least of all because that is one of the core American values that we will fight to protect at all costs as proud U.S. Marines.” 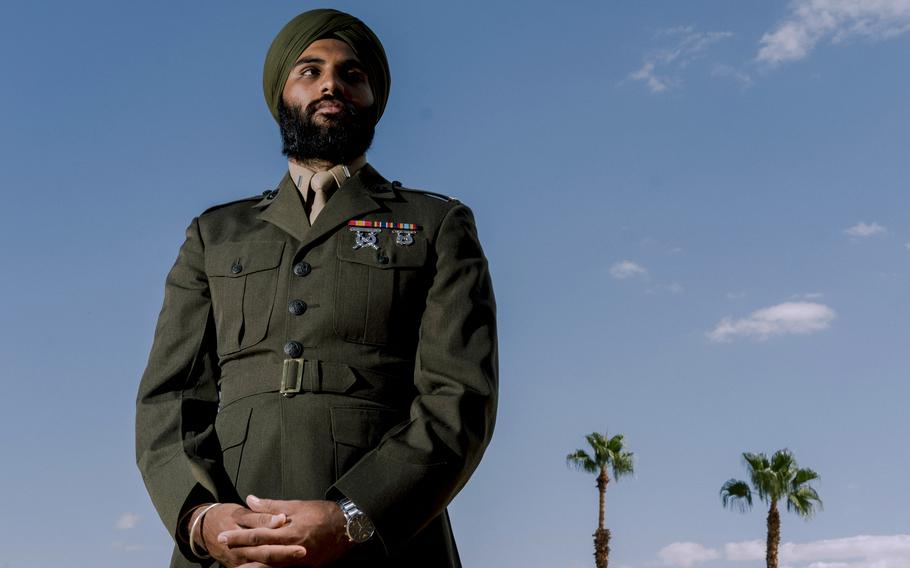 Capt. Sukhbir Singh Toor, seen here as a lieutenant in 2021, filed a lawsuit along with three prospective Marine recruits, saying that the service is unfairly and unevenly applying grooming standards in its treatment of Sikhs. (Mark Abramson)

Tue Apr 12 , 2022
10 of the Best Work Pants for Every Project The AskMen editorial team thoroughly researches & reviews the best gear, services and staples for life. AskMen may get paid if you click a link in this article and buy a product or service. A spring thaw is well under way […]