The suit, announces Tristram Hunt, the besuited director of London’s V&A museum, is not what it used to be. Sales of men’s suits have fallen by 50% in the past two years – after two years of WFH, it seems men are no longer quite so keen on the rigidly anonymous formalwear in vogue since the 19th century. Could the suit, court appearances aside, be about to go the same way as the fax machine? Or is the alternative – dressing like Dominic Cummings – too nightmarish to contemplate?

Fashioning Masculinities, the V&A’s first exhibition to unpick the evolution of menswear far beyond the boring old suit, opens today. Drawing from its collection of 100,000 garments, the show “celebrates the power, artistry and variety of male attire and appearance, and in doing so, attempts to deconstruct norms and forms of masculinity,” says Dr Hunt, adding “As Niccolo Machiavelli, who knew something about the appearance of power, put it ‘Two yards of pink cloth can make a gentleman.’”

Pink is gloriously celebrated, as is red, gold, blue, purple – Western menswear hasn’t always been restricted to charcoal, navy, or black in order to signify power. Reds and pinks were once about status – it showed you could afford the dyes, shipped in from faraway. Before the 19th century largely killed off colour in menswear, moneyed men enjoyed sumptuous fabrics, colours, lace and ribbon almost as much as their female counterparts – the male fabric palette had not yet been drained.

Four years in the making, Fashioning Masculinities is divided into three parts – Undressed, Overdressed, Redressed. Its curators Claire Wilcox, (who previously curated Alexander McQueen: Savage Beauty), Rosalind McKever and Marta Franceschini, have placed 100 outfits and 100 artworks side by side, along with video, accessories, and an eye-popping celebratory finale.

Fashioning Masculinities deconstructs the cyclical history of menswear between 1565 to the present day. It’s as much about gender fluidity as fashion. We may think we’ve invented it, but Marlene Dietrich was able to wear a tuxedo in 1932, while Harry Styles’ Vogue cover frock caused a furore almost a century later – straight men subverting gender via fashion, Chanel for Boys make up range aside, is still very much in development, despite icons like Bowie leading the way all his life. (He is here, of course, represented by a suit he wore in the 90s, his shoes a pair of manly Katherine Hamnett brogues with kitten heels).

Says Wilcox, “Masculine fashion … has long been a powerful mechanism for encouraging conformity or expressing individuality. Rather than a linear or definitive history, this is a journey across time and gender. The exhibition brings together historical and contemporary looks with art that reveals how masculinity has been performed.” She hopes there will be further shows; there is so much more to explore.

The first room, Undressed, examines the male body and underwear, looking at classical European ideals of masculinity. From loose billowing shirts to tight shape wear, via a life-affirming dance performance from choreographer Matthew Bourne’s New Adventures featuring fat, hairy naked men joyfully leaping around (gender may be fluid in Fashioning Masculinities, but apart from Bourne’s bears, body shape diversity is not), we see how Western masculine beauty ideals can be traced back to Renaissance marbles like Apollo and his fig leaf. Prints and photography include all kinds of bodies, from David Hockney drawings to a Calvin Klein advert. Sheer fabrics are represented by Virgil Abloh for Off White, and a classic jockstrap, once owned by real life Gatsby, the tennis star and diplomat Tony Biddle, gets its very own glass case. Tom of Finland is here too.

The middle section, Overdressed, looks at the elite masculine wardrobe, haute couture both contemporary and from the past. This is where the colour is. Everyone is here, performing masculinity, from Horatio Nelson’s famous dark blue admiral’s coat and stripy silk stockings to the aptly-surnamed Harry Styles’ bright blue velvet Gucci suit.

Global trade meant the wealthy in past centuries could adorn themselves like peacocks with lavishly adorned textiles, imported silks, and floral patterns; designs from Gucci and Fendi to Orange Culture offer a more contemporary lens. A rich crimson doublet from around 1620 – red cochineal dye began being imported from Mexico to Europe around this time – is displayed next to a blood red Paul Smith suit from 1998, which the designer describes as “quintessentially British but with a more dandyish attitude.”

A beautiful Dolce & Gabbana cape is juxtaposed with a Sofonisba Anguissola painting, but the cape that steals the show is once again part of an outfit worn by Billy Porter – a silver cape and suit, exquisitely embroidered in sparkly jewelled flowers (it took six months to make), lined with hot pink – think next level Andre Leon Talley in full technicolour – which Porter wore to the Golden Globes in 2019. Designed by Randi Rahm, it is a thing of astonishing beauty, redefining masculinity in a glorious swirl. You could spend ten minutes in front of it.

Overdressed men in pink are, as we have established, nothing new – before it was consigned to Barbie, pink was a principal colour for fashionable men, as shown by portraits of men wearing pink painted by Joshua Reynolds alongside pink ensembles by Harris Reed and Grace Wales Bonner. Diarist John Evelyn, commented in 1661 how one dandy had “as much ribbon on him as would have plundered six shops…all his body was dressed like a May pole.” Contemporary outfits include a powder pink mohair suit, a dusty pink safari suit, hot shiny pink glamrock ensemble, and a three piece suit and kilt with codpiece in palest pink.

The third gallery, Redressed, returns to the modern masculine uniform of the suit. It is monochrome in here, with immaculate tailoring at times subverted by Alexander McQueen hacking up suit shapes into new shapes, and Jean Paul Gaultier fusing a suit with a sari, dark blue with dark gold – resulting in a thing of considerable beauty. As is the sequinned Haider Ackermann suit worn by Timothee Chalamet to the Dune premier in Venice.

From Regency style icon Beau Brummell to the contemporary runway, Redressed presents English country tailoring, the origins of the suit, and how military attire influenced civilian dress. Here are the classic male silhouettes of the 19th and 20th century, bowler and top hatted, sharply creased; the very definition of what we regard as traditional masculinity. Not a ribbon in sight.

Yet even within the constraints of this narrowed version of masculinity, creativity always gets involved to subvert and play. Amid Gucci, Versace, Prada, McQueen and Dior are examples of street style, which is the one area of this show which feels a bit neglected, given its enormous breadth of influence – hip hop barely gets a look in. Redressed instead focuses on the mass-produced suits of the 20th century, and how Mods and Teddy Boys made the suit their own. Examples of suit wearing from Oscar Wilde and Cecil Beaton to The Beatles and Sam Smith are all here.

And then you exit past the three ball gowns worn by Porter, Styles and Bimini, and it becomes apparent that men are reclaiming a lost flamboyance, and making it their own again. Not before time.

Saint Mary’s, long in Gonzaga’s shadow, deserves its due

Sat Mar 19 , 2022
To understand why Saint Mary’s is an easy NCAA tournament team to root for, start with the motto. Gritty, not pretty. That’s the story of this team, its season and two decades of accomplishment perpetually overshadowed by a famous rival that has penned the most outlandish success story in college […] 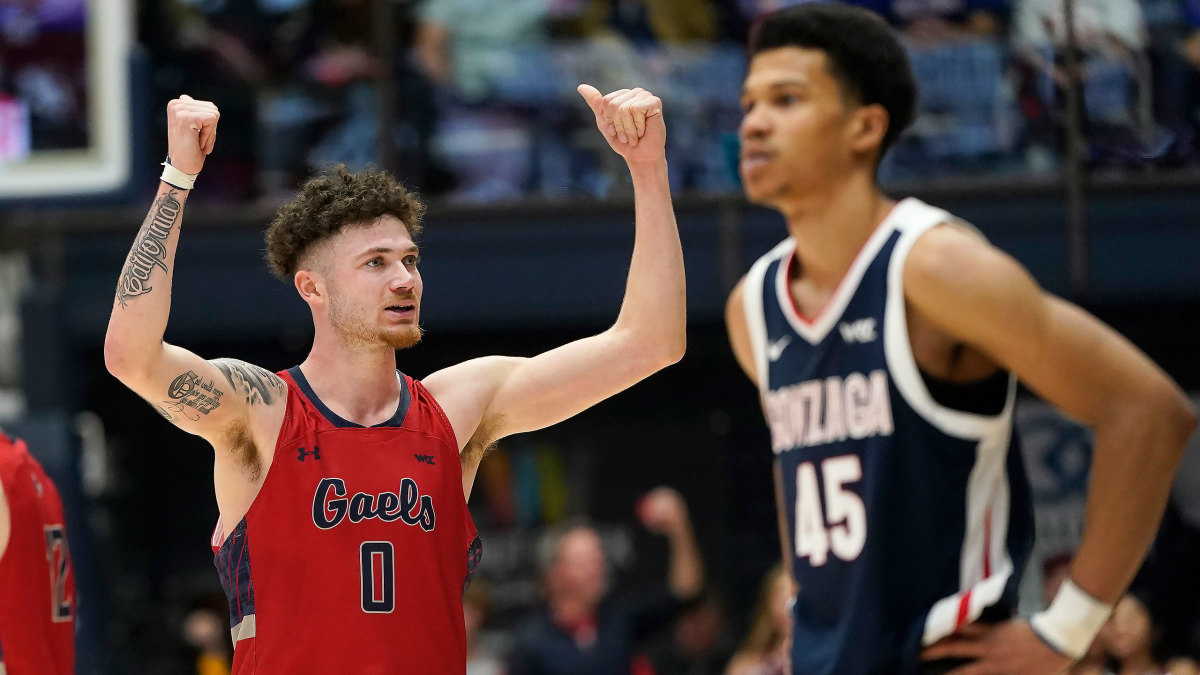