Five years before Molly Goddard officially incorporated men’s clothing into her brand, the British designer enjoyed an unexpected menswear moment; in a 2015 issue of Dazed, Atlanta rapper Young Thug appeared in an image by Harley Weir wearing a sheer, pale-pink tulle dress. The photo went viral, with Thug attracting praise for his gender-bending, no-fucks-given attitude to fashion. His sister Amina, however, was not impressed; mid-shoot, she reportedly screamed at Thug to “TAKE THE TUTU OFF, NOW!”

Goddard’s new Autumn/Winter 2022 collection, shown today on a raised runway in a light-filled leisure centre located in Marylebone, marks the designer’s fourth foray into menswear. “It was always something I wanted to do,” she says. “I like to make clothes for my friends to wear and my male friends felt left out.” Standout pieces included kilts (made in Scotland), vibrant pink Fair Isle jumpers, bowling-type shoes she calls “our version of trainers,” and a racy white miniskirt worn over denim jeans – these androdynous men’s looks were mixed in with Goddard’s bountiful, signature tulle dresses worn by women.

I imagine the Molly Goddard man as someone who likes to go on long countryside walks, but parties hard in London on the weekends; the check suits and woolly jacquard jumpers have an air of middle-class British countryside to them, suffused with the second-hand thrift of the Portobello road – but, this being Goddard, there is of course a playful, subversive twist. “There are lots of well-dressed men in my life!” she says, citing her partner Tom Shickle and photographer Arthur Williams as sartorial inspirations. Here, we speak with five men about why they love wearing Molly’s clothes.

“I first came across Molly’s work four or five years ago. I was working at i-D and she was one of the young designers people were really excited about – it was hard not to notice her. I really enjoyed the softness but also the presence that she had. She had these creations which came to life without someone even wearing them. Visually, they were very stimulating, soft and nice to think about.

“The menswear has a soft masculine energy, but it’s also quite sexy in the material. The mesh tops for example, they’re very subtle and weirdly masculine, but also soft. She has a very unique viewpoint. I have one of the mesh flowery tops which gets commented on every single time I wear it. It’s such a delicate piece but it’s something I can wear to dinner or to a club as well, or during the day. I don’t have many clothes, so it’s nice when I find things which have that much versatility.

“When I think about Molly’s clothes, I think about things that can be worn anytime. That might seem unrealistic when you think about how big some of her dresses are, but I believe they’re things that can be worn in the evening or during the daytime. They’ve got a playfulness which is appropriate for everything. Molly’s clothes are for every occasion. She has a sense of security within herself – she’s not screaming to be heard. It’s very intentional clothing. The clothes speak for themselves. There isn’t a circus around it, which I really like. It’s like a quiet storm. It’s consistent, it doesn’t follow trends. The clothes are worn by completely different genders and generations, and that versatility is interesting.“

“I first met Molly at a friend’s birthday party and I knew she would be an important part of my life! She was glowing and fell off the stage she was dancing on. 11ish years later, we have a baby and I haven’t been out dancing since before he was born, so that feels like a very long time ago.

“I felt very lucky when Molly started menswear. Her womenswear is fun, special but grounded, always honest and straightforward – I was really excited to see how this would translate. I guess menswear in general is less about ‘fashion’ and more about clothes, what you want to wear and making the most special version of this within a particular set of codes. Molly’s interpretation and her elevated versions of these classic pieces are really special but always wearable.

“However many metres of fabric are in her womens pieces, they’re always somewhat practical – you can put them in the washing machine – and her men’s is kind of the same. I just got a pair of trousers from S/S22 that are in a heavy pinstripe taffeta which I think I’m going to wear a lot. Molly approaches design in a different way to others – the looks are grounded in a time, place, person or memory.“

“Mine and Molly’s families have known each other for years, but I first started working with her at the A/W17 show. Ever since then I’ve been invited back to take pictures of her collections over the years. My sister does the videos so it’s always quite a family affair. It feels like a good team to create something quite magical.

“I’ve always known Molly to make clothing, so it was obviously the next step for her to start the brand. Ever since then, it’s been amazing to watch it all snowball into something that it is today. It’s a brilliant brand with such fun clothing. When Molly started doing menswear, I was very happy to have a chance to get pieces for myself. I would wear one of her dresses, but I loved having all the menswear to wear as well. Every time I go into the studio before the shows, I’ll have a nice little look through the collection and see what I’m going to take home with me.

“I’ve worked with other menswear designers like Martine Rose, who I’ve always really liked, but Molly takes it on a different side. Martine is a bit more modern and street with her interesting suits, but Molly is exciting and playful. There’s always a bit of humour behind everything. Usually I wear mostly black, but if I get some new pieces from Molly, it’s nice to add a pop of colour.“

“I remember when Molly first did menswear – it was 2020 and I liked it so much that I emailed Daisy Hoppen, who looks after her press, straight away and asked if I could interview her about it. We spoke the next day and I wrote an admittedly very gushy feature in which I said that the four menswear looks she showed were the highlight of that whole London Fashion Week for me.

“I think I was so excited because even though I have been to a fair amount of menswear shows, and see a lot of menswear collections, it’s actually quite rare that I want to wear the clothes. But with Molly’s menswear, I wanted to wear everything: the check suit trousers, the stripe mohair jumpers, the Fair Isle cardis, the sweater vests … It’s sort of what I wear anyway, just loads nicer. It’s classic but a bit off-kilter. And fun, too.

“Something Molly said to me that afternoon really stuck with me, and distilled some of my own feelings about menswear which, despite having written about for the better part of the last decade, I feel like I have a funny relationship with sometimes. “I find menswear quite challenging,” she said. “It’s all very fashionable and so I wanted to do something that wasn’t fashionable, wasn’t overly done, but was fun and colourful at the same time.” I feel the same, which is probably why I like her menswear so much.“

“Molly approaches design in a different way to others – the looks are grounded in a time, place, person or memory“ – Tom Shickle

“I discovered Molly Goddard through her Central Saint Martins graduate collection, and then later saw her pieces in Dover Street Market. It’s a legit brand, and I loved all the different textures she used, the strong tulle and the knitwear. It was a full package – she was the real thing.

“I love to use her big tulle dresses in my shoots, they always work super beautifully since she brings them in different colours and silhouettes. Somehow they give an artistic touch to every look. You could put a Molly skirt on trousers and it would still look good. She has a very artistic approach, there’s always reference to art and architecture.

“It was a very logical step for Molly to introduce menswear. It’s mostly knitwear that she developed, and the fabrics she uses are super rich. It’s about high quality and you really see there’s a craft in there. I have a menswear vest, which is really nice because you can layer it in different ways. You can put it on a hoodie or on a shirt. It’s really easy to combine and to style.“

What's The Best Style For Your Face Shape?

Sat Feb 19 , 2022
High fade looks includes a number of popular hair styles with height such as the pompadour, quaff, or faux hawk. Because these haircuts will elongate the face, they’re best reserved for anyone with a round, square or heart-shaped face (via Fashionbeans).  According to Men’s Hairstyles Today, the best haircuts for round faces include […] 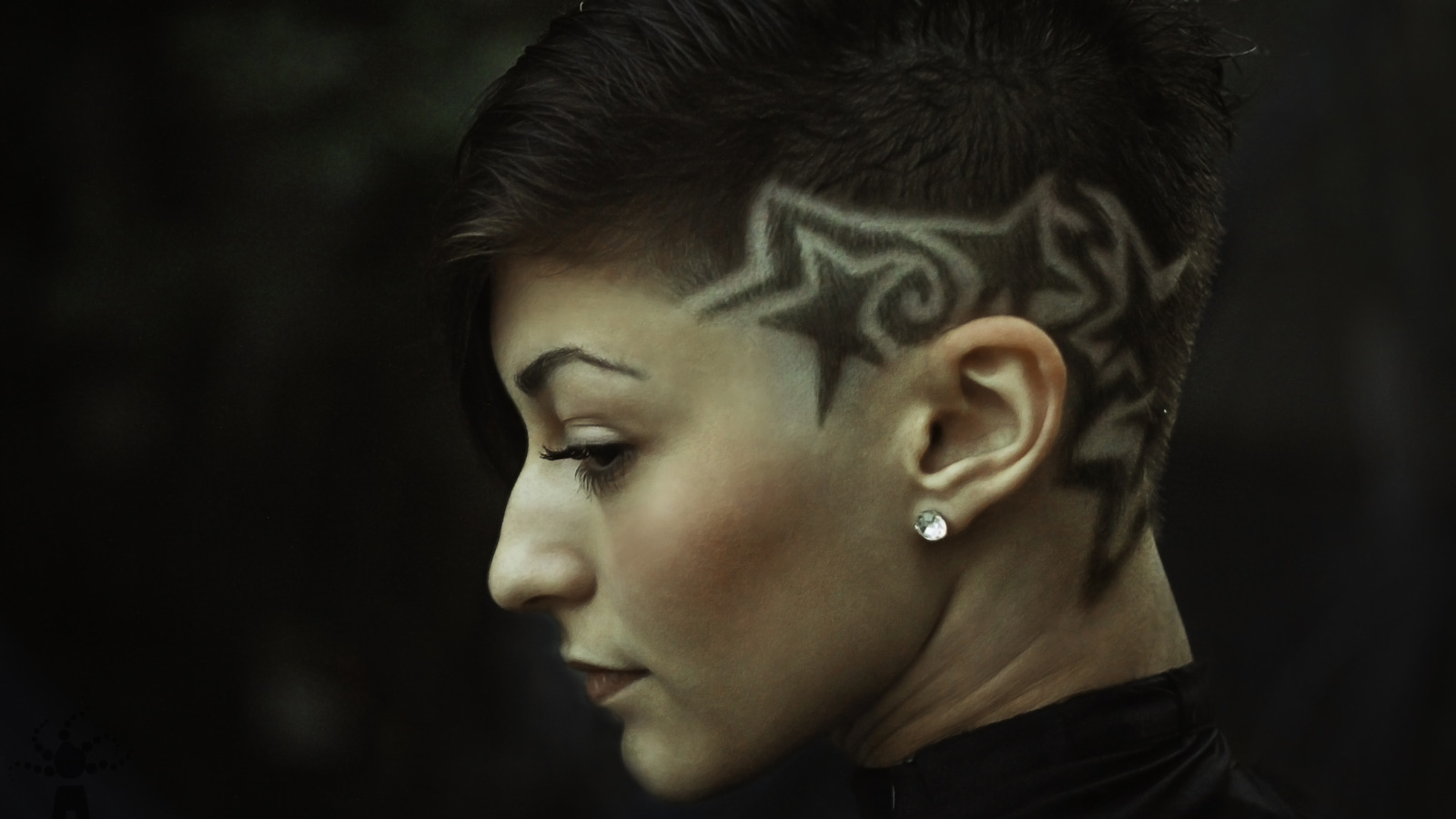