Two men graced two different covers for the May 2016 issue of Esquire: George Clooney holding a puppy in a Giorgio Armani suit and tie; and Bill Murray in an Ermenegildo Zegna suit, in the process of cutting off his tie. Both images look great, but it was the latter that represented the zeitgeist best.

Two years prior, thanks to an artist named Brad, a friend of a New York magazine writer, a portmanteau coined by the art-collective-slash-trend-forecasting-group K-Hole became popularized: normcore. A week later, the Esquire style team agreed with the term, liked it even, but wouldn’t back it entirely. Many in menswear media didn’t—at least not publicly. Normcore is a trend that does away with the standard suit and tie altogether. It promotes the utmost casualness: things like roomy tees and pants without any flourishes, and New Balance sneakers. Think of those folks working on large campuses in Mountain View, California, the big tech guys, and then make the uniform deeply considered instead of simply tossed on, and you’ve kind of got the drift. Years later, the effect has rippled through media, fashion, even Wall Street. It’s not that old ways of thinking about dressing professionally have been totally eradicated—the dress shirt remains intact, and so do the trouser—but the tie, in a lot of cases, has become obsolete.

Neckties, once a required accessory in all professional settings, are now either a strong suggestion or done away with altogether. To wit: save for two colleagues, each on two different occasions, seeing a tie in the post-pandemic Esquire office has been scarce. I wouldn’t say that full-blown normcore is still happening, but a good portion of the population is cutting it very close.

Despite all this, there are certain instances when you just need a tie. It imbues formality, letting others know that you mean business. Walk into a board meeting without one, and, more often than not, you will look out of place. Also, there are many events, including galas, weddings, and some cocktail parties that ask you to follow a strict dress code—read: normcore not allowed. Another thing: fashion, at its core, is reactionary. The prevailing style within one time frame will almost always lead to the complete opposite in the next.

So yeah, the image of Bill cutting his tie may have been—and still is—apropos, but perhaps sooner than we all might think, George’s silver, four-in-hand knot may be the look we’ll all be striving for. It’s certainly a classic, and one that we’d back entirely. And when this happens, you’ll be ready, because we’ve rounded 15 of the best ties for you—all of which, regardless of the trend du jour, will never look at out place.

Ah, the classic navy blue tie, a standard that every man should have in his wardrobe. And this no-frills options from Amazon Essentials won’t even put a dent in your bank account.

If standard navy is too bland for you, spruce it up with the always-reliable polka dot tie, this one from a retailer that knows the industry better than most.

Mods, punk rockers, and the gang in Reservoir Dogs: all these cool cats have sported a thin black tie. Join the this venerable roster by copping this affordable one from the minimalists over at Calvin Klein.

Blue and yellow: complimentary colors that rep some of the best, perhaps most underrated groups around, including the Cub Scouts, Hufflepuffs, and the L.A. Rams.

The silk knit tie, especially in navy, is casual elegance distilled into a single accessory. It’ll never do you wrong.

It should come as no surprise that Suit Supply, purveyor of sharp blazer-and-pant combos, offers ties of the same caliber.

Looking for a fun print that ins’t too distracting? Check out Bonobos’s menu, which includes some mighty fine crabs.

Todd Snyder’s design are always—and we mean always—smokin’, And this silk knit option, in a rich tobacco color, is proof.

When it comes to a knit tie with a chevron pattern, it truly doesn’t get any better than one from Missoni, the leading purveyor of the motif.

Of all the textured patterns, herringbone is the fanciest of ’em. It’s a great way to add a little something-something to your fits.

Remember that four-in-hand tie knot from the intro? This one from Giorgio Armani is as close to Clooney’s number as it’s going to get.

The paisley pattern is a stalwart in the tie world, and there are very few that do it classier than the classy folks over at Zegna.

No one—absolutely no one— does silk brocade better than Dries Van Noten, the undisputed master of the rich material.

Since the ’70s, Drake’s has been outfitting English gents in the spiffiest shirts and ties cast in elegant prints or tried-and-true patterns, like this blackwatch plaid.

In the shirting world, Charvet is a class apart. The same could said of its whimsical and absolutely wonderful ties.

Fri Mar 25 , 2022
These men are saying “yes” to the vest. Spring has sprung, the city is reopening, workers are returning to offices, and, Midtown men are out in vests in full force. “You don’t want to wear a sports jacket to the office anymore. The vest just comes in perfect for every […] 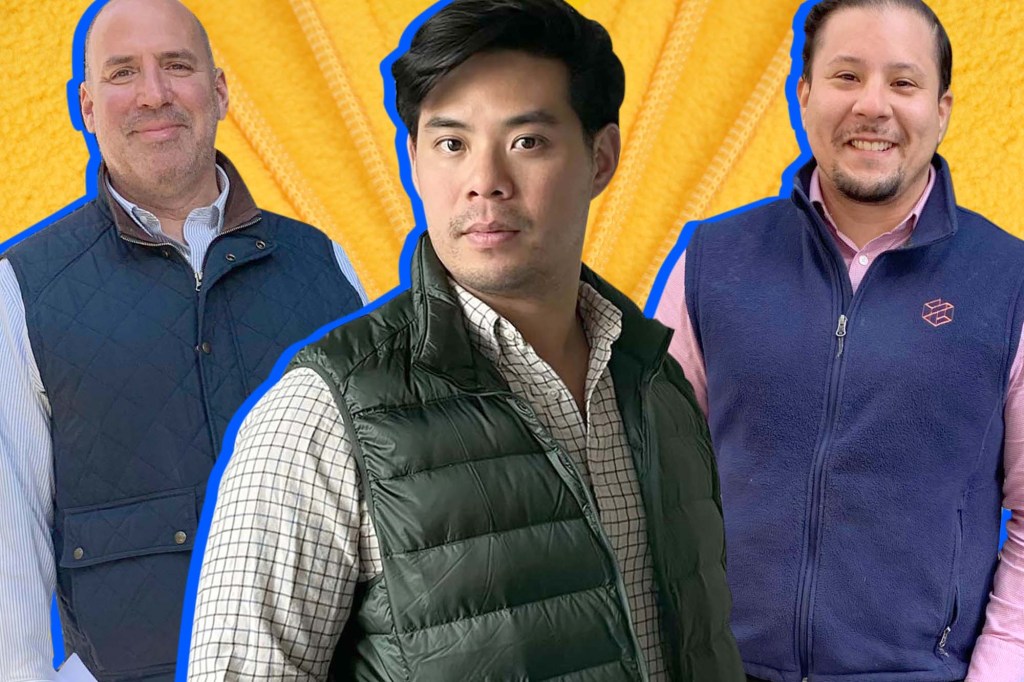