The sun is shining, the humidity is unbearable, and you’re sweating just standing. All you want to do is reach for shorts, sandals, and the lightest top in your drawer. But there’s an event to attend, a scenario that requires you to dress up. It could be a wedding, a boardroom meeting, or an IRL job interview. You can’t get away with anything less than a two-piece. It’s time for a linen suit.

Linen—of all the standard materials used in suiting—is the lightest, the most breathable. The tradeoff being linen, in its purest form, is far less structured than other fabrics. That could work if the event at hand is casual. But if you really want to look distinguished, reach for a cut that’s mixed with cotton, silk, or even wool. A suit with these blends will hold its shape and offer the airiness you’re looking for. It’s what linen does best. We have all these options (plus a few surprises) below ready to give you some ventilation in the sweltering summer heat no matter the occasion.

Wedding season is rounding the corner, and if the event is outdoors and the dress code calls for black tie optional, semiformal, cocktail, beach formal, or dressy casual, J.Crew’s iconic Ludlow suit—a style we endorse regularly—is as foolproof as it gets.

Suffice it say, it’s been a while since many of us have gone on dates IRL. And if scratching your head, confused as to what to wear on a night out this summer, keep things light and spiffy with this slim-fit suit from Mango. It feels nice to get dressed up again—especially in a fit like this.

If you’re not ready to squeeze into a slim-fit suit just yet, Alex Mill has a looser option. The two-piece is less structured and gives off a laidback vibe, but still looks presentable to wear out and about.

Taking the laidback vibe even further is this linen suit from Folk. Not only is the suit jacket meant to have a crinkled look, the matching trousers feature a drawstring. It’s like wearing tailored sweats, but sleeker and breezier.

Banana Republic is a master at offering styles that are equal parts disheveled (in the best sense) and distinguished, the kinds of pieces that have character and won’t annihilate your bank account. This linen suit is a prime example.

There are still many professions that mandate a two-piece suit. Anything less just simply doesn’t cut it, no matter how hot the temperatures might get. For those in corporate environments, Ted Baker has a sleek linen suit in navy, which looks just as structured as the traditional wool styles.

Tapered sweats or something similar are the best styles to wear for travel. But if you are the kind of fella who swears by a suit, Todd Snyder has just the thing. The brand’s aptly named Traveler suit trousers is a cross between a tailored jogger (complete with a drawstring waist) and dress pants. And the jacket features a natural shoulder, which makes it easier to slip on and off.

When it comes to all things linen, 120% Lino is the name to know. The newish Italian label specializes in the material, offering a slew styles for every warm-weather occasion. Which means it has a number of suits in a variety of colors and cuts, all them sharply tailored. Case in point: this sharp linen suit in summer-ready white.

The Italians aren’t the only ones that know a thing or two about fine tailoring. Here to rep the French is Sandro, a brand noted for its slim fits that you can mix and match, depending on the event on calendar. Together, this linen suit, in versatile tan, is the epitome of formal—but pair the jacket with jeans or the trousers with a Hawaiian shirt, and you have great casual separates.

Wearing linen can veer toward a more casual vibe, but this is not the case when it comes to Suitsupply. The brand cuts its suits with precision, offering the sharpest silhouettes. Indeed, it has a number of great linen options that follow this credo, but the one that caught our eye is this slim double-breasted style with subtle herringbone pattern.

If you’ve watched Gosford Park, Downton Abbey, or anything created by Julian Fellowes, you know that going to the countryside is an event. The men in these movies and shows never disappoint with their fits, wearing suits that are richly textured, expertly tailored, and reflect their sprawling woodland estates. Capturing all of this is this beautiful linen suit from Ralph Lauren.

Some men like to let things hang, preferring styles that drape over the body. And if that describes you, Barena breezy linen suit, which features a drawstring waistband and cuffed hems, is just what you need.

Etro is a master as prints and color, particularly paisley in a range of eye-catching hues. It has brought the same exuberance to the classic check pattern—this one combining gray, purple, and green beautifully.

When it comes to playing with proportions, Thom Browne is king. The designer offers looks, all with a school-boy bent, that crops sleeves, elongates hems, widens panels, or minimizes them. He always pushes the boundaries of what a suit can be. And this linen style is a great example of what he does best.

If there’s one thing you need to know about Brunello Cucinelli, it’s that he is a master of textiles. People call him the king of cashmere, and that title is definitely deserved. But this striped linen suit shows that he also has full command over an incredibly airy material.

Save 25% on Father’s Day gifts at Michael Kors

Fri Jun 3 , 2022
— Recommendations are independently chosen by Reviewed’s editors. Purchases you make through our links may earn us a commission. Father’s Day is coming up and if you’re looking for a stylish gift for dad, we found the sale for you. Michael Kors is hosting a Father’s Day sale right now […] 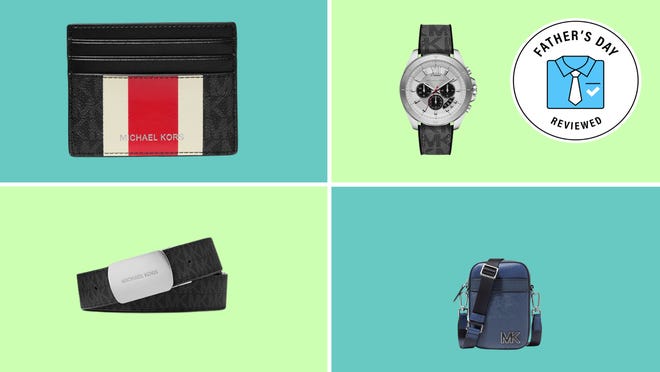