Men’s Fashion Week is often a hub for experimentation: It’s the place where ideas are tested before the big-time womenswear shows. Now with rising interest in menswear, the men’s collections have become a bellwether of where fashion is going. But after two-and-counting years of pandemic, limited travel, smaller runway shows, and mostly digital audiences, where is fashion going? And who will set that agenda?

Is it the celebrities? (Hello, Juliye!) Is it the crowds, gathering in the hundreds outside the shows capturing content? Is it the people who are in the room, privy to the physical fashion experience, or the people who have never been to a fashion show at all but are reacting instantaneously on social media? Or is it the designers themselves?

This season’s collections are grappling with these shifting tides. Many catwalks included high-wattage guest stars: Machine Gun Kelly opened Dolce & Gabbana while Prada cast everyone from Kyle MacLachlan and Jeff Goldblum to Ashton Saunders and Asa Butterfield. Marc Jacobs took a turn for LVMH special prize winner KidSuper, and Olivier Theyskens did the same for Y/Project. Other shows welcomed outside onlookers, none better than Louis Vuitton, where risers were set up outside for fans to watch the likes of Naomi Campbell and J Balvin celebrate Virgil Abloh’s legacy. In Tokyo, both Doublet and Maison Mihara Yasuhiro staged shows on the street, kissing goodbye fashion’s decades-spanning invite-only mentality.

When it comes to the clothes, the messy mélange of the way real people dress—i.e., the chaotic magpie look of Gen Z style—dominated many runways, as did a queer attitude. As Nicole Phelps and GQ’s Rachel Tashjian noted in our Talking Fashion newsletter, menswear has never looked so queer, with gently curved suiting, cutouts, and body-skimming clothing. Will womenswear catch up?

When it comes to the menswear trends, the best ideas don’t congeal. They are Loewe’s anti-meta ready-to-wear and Prada’s ageless and genderless armor coats. The giant shearlings at Alyx and 4SDesigns are sure to gain traction, as will the queer stylings of GmbH and Fendi. The fashion audience is changing, and the people who analyze it and inspire it have to change too. Let’s see what carries into the womenswear season this month.

No fewer than five designers name-checked Giorgio Armani in review appointments. His blouson bomber jackets and Raf Simons’s MA-1s have reinvigorated interest in the silhouette, all bubbly and bulbous up top.

Catsuits were the story one year ago, and second-skin menswear continues to trend. At Loewe, Jonathan Anderson scanned models’ bodies for a one-to-one replica of their physique printed on white jersey. Vetements’s version is covered in dollar bills. Both are good for getting a message across.

Men’s tailoring has taken on a new, more feminine posture this season, with wrapped lapels at GmbH and portrait necklines at Fendi. Accessorize with pearls and faux fur.

A fuzzy piece of outerwear is always in style, and a new crop of oversized shearlings from Sacai, Rick Owens, and Hermès will be irresistible when cold weather comes back later this year.

Ye and Julia Fox were oddly prescient with their coordinating denim looks at the Kenzo show. Heron Preston, Bianca Saunders, and, of course, Nigo at Kenzo rethought total-denim looks on the runway this season. The most enticing takes? A denim monogram brocade dotted with flowers at Louis Vuitton and the laser-etched Psycho scenes on the back of jackets at Undercover.

Slim, ’40s-meets-’70s suiting with a preppy, Japanese vibe appeared in collections far and wide. Kenzo might own the look, but it’s been informing menswear expansions at Rhude and Erdem for seasons. Try a tartan—just don’t forget the tie.

Prada’s cinched trench might have the biggest, boldest shoulders of the season, but plenty of other designers are also platforming a supersized coat. Casablanca, Dolce & Gabbana, and L.V. have colorful options while Zegna has classic black covered.

The LOL of It All

The world is topsy-turvy—why shouldn’t fashion be absurd too? Jonathan Anderson embraced silliness and strangeness at both JW Anderson and Loewe, but a childlike sense of naivete was also palpable at Comme des Garçons Homme Plus and Moschino. Vetements’s tongue-in-cheek irony, which defined the brand’s early days, feels right again too.

These men's hairstyle trends are set to be big in 2022

Sun Feb 13 , 2022
Think natural curls, curtains and the Shag (Picture: Taylor Taylor London/Getty) New year, new trends to keep track of. We’ve already seen hairstyles like the mixie and bixie emerge for femmes in 2022, but what about trends elsewhere on the gender spectrum? We asked Ben Grace, director at salon Taylor […] 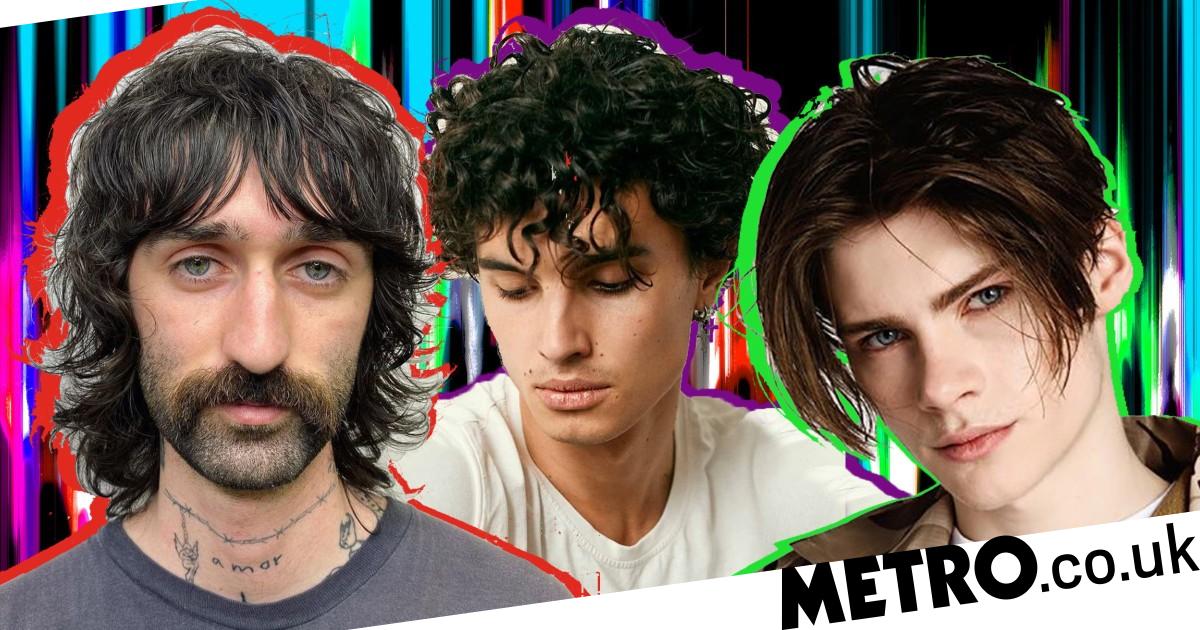