Bear Gryllis has hiked in the Himalayan mountains, crossed the Atlantic Ocean on an inflatable boat, and parachuted out of a plane over the African desert. On his wrist throughout all these perilous scenarios? A tactical watch. Others may favor a dress watch or clamor for the latest vintage Daytona going up for auction, but explorers and those who served (or still serve) in the armed forces, like Gryllis, usually opt for a timepiece that is rougher, tougher, and bolder.

There is no clear-cut definition of a tactical watch, but there are a number of targets that a timepiece should hit to fall under the category. Firstly, it needs to be immensely durable, capable of withstanding shocks and intense changes in air pressure, along with being impervious to water. A tactical watch also needs to be lightweight and scratch-resistant, which is why it should feature straps made of rubber or heavy-duty nylon or canvas; it’s best to avoid leathers and most metals altogether, unless it’s titanium. The dial should also be highly legible, allowing you to track everything from the time of day to your time underwater (lest your oxygen tank run out).

There are also a couple styles that have add-ons, including barometers, thermometers, compasses, backlighting, solar-powered batteries, and other tools that’ll help in the field or wilderness. Lastly, the look should be beautifully burly. It should telegraph ruggedness, stealth, and reliability. Even if you’re not a daredevil, you can still emulate the style of one with the tactical watches below. And should you ever want to follow in Gryllis’s footsteps someday, you’ll have a timepiece ready for your big adventure.

It might surprise you to learn that the DW5600E-1V is not the original G-Shock watch. That’s probably thanks to the model’s ubiquity–and that infamous ad featuring it being slapshotted into a goalie’s mitt. Casio now calls it the “quintessential G-Shock,” and that seems about right. The look is a throwback to the ’80s, when G-Shock inventor Kikuo Ibe endeavored to create a watch that could withstand pretty much anything anyone could throw at it. That means it’s ridiculously shock resistant, has 200 meters of water resistance, and is about as indestructible of a watch as you could ask for, especially with a measly sub-$40 price tag.

If you’re on the hunt for a more modern, tactical look, G-Shock has you covered there, as well. The DW-9052GBX-1A9 (say that three times fast) is shock-resistant, water-resistant, and comes with extra features that include electro-luminescent backlight and flash alerts. This is the kind of watch that’s perfect for diving deep into the ocean or catching some serious air. It’s almost hard to believe that it’s less than $60.

Casio also offers a sweet deal on a tough-as-nails tactical watch under its own name. That’s not surprising, considering that G-Shock falls under the Casio umbrella. Also not surprising is that this water-resistant timepiece is perfect for the great outdoors: extras include a compass, thermometer, and stopwatch. If you’re trekking out into the great unknown—or just going on a hike—this is the watch you want with you.

Though rugged in appearance, this field watch, complete with a super sturdy green nylon strap, is noted for being comfortable. It is modeled after watches worn by the military, which means it is scratch-resistant and hardwearing. The real highlight, however, is that it doesn’t have a battery: the Eco-Drive movement is powered by artificial and natural light, and reserves power for months on end.

If you plan on trekking up and down a winding mountain path sometime soon, you’re going to want to have this Suunto watch on your wrist. This is because the timepiece has a built-in barometer that detects changes in air pressure, a compass that’ll make sure you’re headed in the right direction, altimeter to track your progress, and (worst case scenario) a feature that’ll inform you of impending storms.

Marathon’s Navigator was built to withstand extreme changes in air pressure, the kind of function required by pilots and parachuters. Cadets at the Kelly Air Force Base know what’s up: how it is water-resistant, incredibly durable, and how it won’t fail anyone seated in high altitudes. That’s because Marathon makes the watches issue to U.S. service members. And whether enlisted or not, now you know, too.

Luminox is Bear Gryllis’s brand of choice, so you just know it’s good. But if you need further convincing, this model, in particular, was actually created for Navy SEALs. The watch features a tough-but-lightweight Carbonox case, a comfortable-but-durable rubber strap, nighttime visibility, and is water-resistant up to 200 meters.

Remember Arnold Schwarzenegger in the ’80s, specifically in Commando and Predator? If you look closely at his wrist, you’ll see this watch from Seiko. Now called the Arnie by fans in honor of the action hero, the timepiece is fitted with a sturdy silicone strap, and features hands treated with LumiBrite and a solar-powered battery that’ll last you six months on a single charge. All that, and you get 200 meters of dive-friendly water resistance, too.

As we previously mentioned, stealth is a key feature to have in a tactical watch—and this one from Garmin is the stealthiest of ’em. Just look at it! And if the aesthetics alone aren’t enough to convince you, know that it features advanced sensors for navigation, preloaded topographical maps, waypoint project, night vision, and a kill switch! Not sure why that last bit is necessary, but if you’re a secret spy, it’ll surely come in handy.

Of course Victorinox, purveyor of Swiss Army knives, has a watch for surviving the wilderness. Not only are the face and heavy-duty paracord strap cast in a camo design, the lightweight carbon composite case is as light, tough, and scratch resistant as it gets. Factor in the Super-LumiNova for low-light visibility, and you have a timepiece ready for perilous journeys ahead.

On the fancier end of the tactical watch spectrum is this style from Bell & Ross. The timepiece is water-resistant up to 100 meters and features a durable canvas strap and LumiNova-treated hands, sure, but its the kind of accessory that’s more about form than function. It just begs to showed off at a campsite—one with a five-star rating.

Mon May 2 , 2022
SCENES shines a spotlight on youth around the world that are breaking down barriers and creating change. The character-driven short films will inspire and amaze, as these young change-makers tell their remarkable stories. Fahad Al Obaidly is creative in the literal sense of the word. The fashion designer-mentor speaks the […] 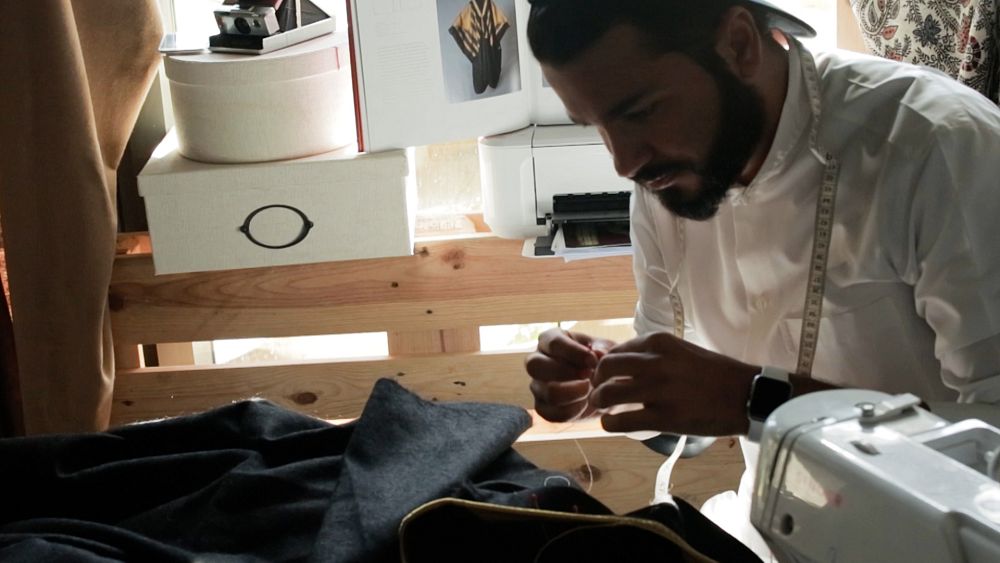